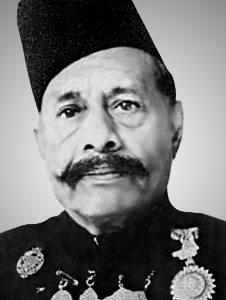 Ustad Faiyaz Khan is the most well known exponent of Agra Gharana in Hindustani classical music. He was the master khayal vocalist of his time. Born at Sikandara near Agra in 1886 (contested as 1888, 1889), he was the son of Shabr Hussain, who died three months before his birth. He was brought up by his maternal grandfather, Ghulam Abbas, who taught him music, up to the age of 25.

Faiyaz Khan’s musical lineage goes back to Tansen himself. He served for a long time as the court musician of Baroda, where he was awarded the “Gyan Ratna”; the Maharaja of Mysore awarded him the title “Aftab-e-Mousiqui.” Faiyaz Khan’s specialities were dhrupad and khyal, but he was also capable of singing thumri and ghazal. Some of his best-known students are Dilip Chan Bedi and Ratajankar. By the time he died (on 5 November 1950 at Baroda), he had earned the reputation of being one of the most influential vocalists of that century. One of the foremost modern classical Indian vocalists, Pandit Jasraj, maintains that Faiyaz Khan and Amir Khan are the most important vocalists of the 20th century.