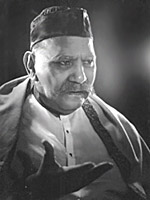 Ustad Bade Ghulam Ali Khan (Devanagari: बड़े ग़ुलाम अली ख़ान, Shahmukhi: بڑے غلام علی خان, Urdu: بڑے غلام علی خان) (c. 1902 – 25 April 1968) was an Indian classical singer. He belonged to the Patiala Gharana of Hindustani classical music, and is considered to be an important representative of the Hindustani music tradition in the early and mid 20th century. Bade Ghulam Ali was born in Kasur, Punjab, British India. His father was a famous singer, Ali Baksh Khan, in a West Punjabi family of musical heritage. At the age of seven, he learned sarangi and vocal from his paternal uncle Kale Khan, who was a singer, and after his death he trained under his father.

Khan started his career by playing sarangi. He became popular after his debut concert in Kolkata.
Khan amalgamated the best of four traditions: his own Patiala-Kasur style, the Behram Khani elements of Dhrupad, the gyrations of Jaipur, and the behlavas (embellishments) of Gwalior. His voice had a wide range, spanning three octaves, effortless production, sweetness, flexibility and ease of movement in all tempi. After the partition of India in 1947, Khan returned to his home in Pakistan, but returned to India later to permanently reside there. He did not approve of the partition, stating: “If in every home one child was taught Hindustani classical music this country would never have been partitioned.” In 1957, he acquired Indian citizenship and lived at various times in Lahore, Bombay, Calcutta, and Hyderabad. He was reluctant to sing for films, but sang two songs based on ragas Sohni and Rageshree for the 1960 film Mughal-e-Azam, in which his voice was represented as Tansen’s by the music director Naushad. To dissuade Naushad, he demanded a high price, reportedly Rs. 25,000/- per song, when the rate for popular playback singers such as Lata Mangeshkar and Mohammed Rafi was below Rs. 500/- per song. Khan was awarded the Sangeet Natak Akademi Award and the Padma Bhushan in 1962. Khan was married to Ali Jiwai, who died in 1932. Khan’s son, Munawar Ali Khan (1930-1989), was a classical singer. His grandson, Raza Ali Khan, is also a Hindustani classical singer. Khan died in Hyderabad at Basheerbagh Palace in 1968, after a prolonged illness which left him partially paralyzed in his last years.