Dr. Meera Kale, performing Indian Classical Raga Madhuwanti at Meherabad Auditoriam during October 2004. The Bandish is composed in memory of Sadguru Shri Upasni Maharaj of Sakori. Write to us for Audio and Video CD production of Meher Baba’s Chalisa Aarti and songs and Classical performances by Meera. Contact here for obtaining a copy of the CD. Download Songs along with other Indian Classical Compositions Here | Download Resume Meera Kale Dr. M. Balamuralikrishna is one of the towering figures in contemporary Karnatak Style (South Indian Classical) music. He is prominently featured in many books, articles and web sites devoted to Karnatak music, including his own. He is not only one of the most admired interpreters of the Karnatak classics, but also a respected composer in the traditional forms. The recording is from an out-of-print cassette on the Sangeetha label. It features several outstanding accompanists: A. Kanyakumari on violin, T.K. Murthy on mridangam and H.P. Ramachar on kanjira. The piece is a composition of Balamuralikrishna in the extended ragam-tanam-pallavi form, set in the ragam Gamanasrama and in the rarely-heard talam Raja Navamukhi. These files have been encoded at a lower bitrate, which makes the files smaller (less than 25 MB each) but reduces sound quality. In 1997, the BBC hosted a series of concerts to commemorate the 50th anniversary of India’s independence from Britain. These concerts were hosted by Mark Tully, at the time the New Delhi station chief for the BBC. Included in the series are two performances that appear here: this vocal recital by Ajoy Chakraborty and a recital by Ustad Amjad Ali Khan and his two sons. Pandit Ajoy Chakraborty is one of the rising stars in the world of North Indian classical vocal music. He is joined in this performance by Samar Saha on tablas and Sanjoy Chakraborty on harmonium. The recital consisted of two pieces. The first was described as a light classical thumri kajri, and the second a full khyal using the South Indian raga Hamsadhwani. Included here is also a brief excerpt of an interview with the host Mark Tully. These pieces were recorded from a radio broadcast in mono. They were encoded at 96 kbps mono, which is the rough equivalent of 192 kbps stereo. They appear here by the kind permission of the BBC. He was all of 6 years old, when Amjad Ali Khan gave his first recital of Sarod. It was the beginning of yet another glorious chapter in the history of Indian classical music. Taught by his father Haafiz Ali Khan, a musician to the royal family of Gwalior, Amjad Ali Khan was born to the illustrious Bangash lineage rooted in the Senia Bangash School of music. Today he shoulders the sixth generation inheritance of this legendary lineage. 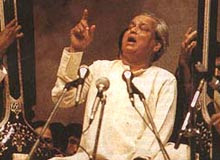